SaS Fellows, Anupama Harshal W., Pankaj Dhaka and Sonal Katyal, have been organising a variety of workshops for school children and teachers in Kerala, UP and Punjab. Follow our social media channels to catch all the action from their workshop. Learn more about the SaS fellowships here.

SaS was invited to participate in a Colloquium on State Action Plans on AMR in India on 14 March 2022 with key government and civil society AMR stakeholders. SaS team member, Sarah Iqbal, participated in the panel discussion ‘Behavioral change and local action plans on AMR’. A short report on the panel discussion can be accessed here. Based on the recommendations received at the meeting, a communique was developed to inform future actions of the government and AMR stakeholders. The full report on the meeting can be read here.

On behalf of SaS, Ponnari Gottipati, served as a Mentor on the “Future Leaders Against AMR” Training Course in the UK for the project ‘Understanding the prevalence of AMR in the education system of various countries from February to March 2022. SaS team member, Somdatta Karak, delivered an online talk ‘Superheroes Against Superbugs – Education and Engagement Initiative on AMR in India’ on 31 January 2022 at ASPIC Clubs Student Meet-up and gave an online talk ‘How to discuss AMR – Lessons from India’ on 10 March 2022 to participants of Future Leaders Against AMR.

Antimicrobial Resistance in the backdrop of COVID-19: where are we and what is next?

SaS partnered with Infection Control Academy of India, ReACT Asia Pacific and the World Health Organisation country office, India to organise a follow-up meeting to the consultation meeting held in the previous month, at the Public Health Innovations Conclave. Held on 12 November 2021, the meeting once again brought together the stakeholders from the human sector, for a deep-dive discussion on AMR in the back-drop of COVID-19.

SaS launched the SaS AMR Champions Series to commemorate the World Antimicrobial Awareness Week (WAAW2021). The series covered conversations with experts and advocates working tirelessly to address the problem of AMR in India. These interviews we hope would inform, inspire, and encourage us all to act against AMR to ensure a healthy future for all. You can read these interviews here.

SaS joined WHO Country Office for India, UNICEF field office for Telangana, University of Hyderabad, and the Infection Control Academy of India for the Go Blue for AMR Campaign in Telangana, a global campaign called by the World Health Organisation during WAAW2021 to raise public awareness about AMR. As part of this, the historic Mozamjahi market in the old city and Durgam Cheruvu cable bridge, a recent landmark near Hitech city, were illuminated in blue from 22- 24 November. The campaign received wide coverage in the press, giving an opportunity to the organizers to communicate the threat posed by AMR and drug resistance to the general public. The SaS team took the opportunity to raise awareness on the ‘Do’s and Dont’s of antibiotics’ among the shoppers and passers-by at the Mozamjahi market illuminated in blue on 24th November 2021. 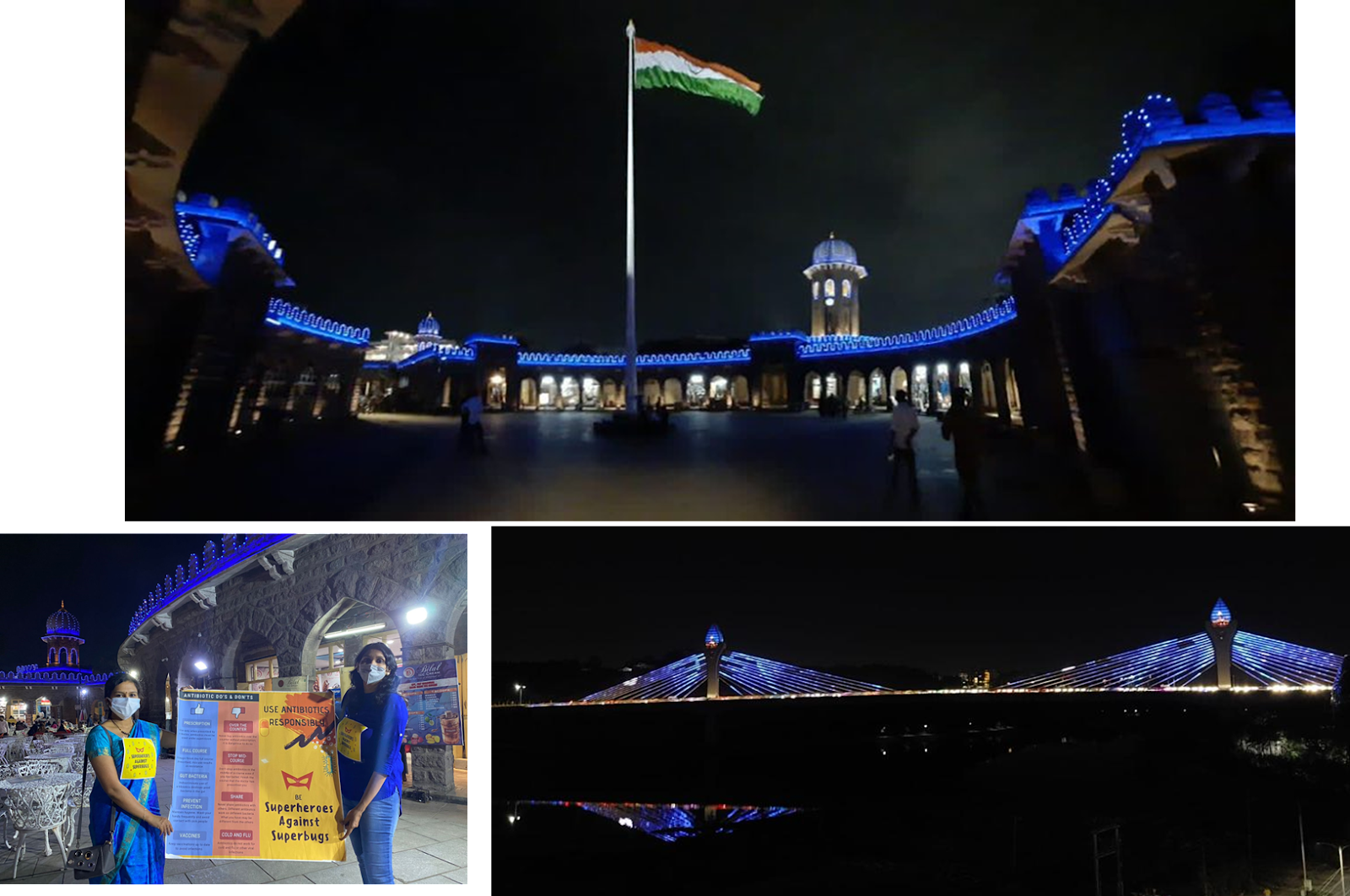 SaS team member, Ponnari Gottipati, gave an interview for “The evolution of Superbug” episode of the “Science & Us” Podcast series by Suno India in September 2021 and was also invited to speak at the AMR Leaders program for Tertiary Students in Africa on the topic “Project Planning, Management, Monitoring and Evaluation” on 2 October 2021.

SaS team member, Sarah Iqbal, gave an online talk ‘Communicating Science and Rational Antibiotic Use to the Public’ at the launch of Poultry Toolkit on Biosecurity by ReAct, Quicksand and COHEART on 18 June 2021 and another talk titled ‘Communicating complex scientific issues to the public’ at an event for medical students organised as part of a health communications programme INNOVATE4AMR by ReAct Asia Pacific on 23 August 2021.

Teach for India fellow, Manvi Sharma interning at CSIR-Centre for Cellular and Molecular Biology developed an online SaS workshop on antibiotic resistance for low-income community students of Seelampur, New Delhi. She created new activities that explain bacterial physiology and the roles of immunity and antibiotics in fighting bacteria in a workshop held on 15-16 July 2021. At this workshop, the students created posters and a video for their peers on the correct usage of antibiotics.

Starting with the week of #WAAW2020, we have experts from various fields talk of various facets of #AMR as the guest curators of our twitter handle @SaSuperbugs! Lot’s happening there, head out to our twitter page and follow the action!

As part of Young Investigator Program 2021 conducted by CCMB, Hyderabad, 10 school children from 7 schools participated in a poster making session on AMR in January 2021

For #WAAW2020, India Alliance and CCMB conducted a webinar on #Superbugs and Making sense of AMR in India as part of SaS, an engaging discussion with an AMR researcher, a science journalist, a patient advocate and an industry specialist, November 2020

SaS was invited to an interactive virtual roundtable discussion entitled Combating AMR in Asia during a pandemic hosted by the Economist Events. Somdatta Karak represented SaS at this event where 15 influential healthcare industry figures from across the APAC region discussed Asia’s current AMR response.

Co-lead Ponnari shared our learnings and experiences from SaS with the newly recruited students of the AMR stewards program run by the Students Against Superbugs Africa initiative, September 2020

Championing the cause of SaS, our student superhero Saathvik Vennelaganti (who previously attended the SaS workshop at CCMB in 2019) and his friends Jaswanth Pallapothu and Sanvrit Kumar Das from Chinmaya Vidyalaya, Begumpet, Hyderabad have taken the message of the wonder of antibiotics and the perils of AMR to his fellow students through an online session in August.

“It is saddening that other students who aspired to join such an event this year have to be held back”, says Saathvik as he remembers his time at last year’s workshop and what inspired him to lead this in his school.

“Superheroes Against Superbugs: Public Engagement and Why?” webinar was conducted for the faculty of Dr N.G.P. Arts and Science College at Coimbatore as part of their Faculty Development Programme.

An informal one day “Train the Trainer” session was conducted by Program Facilitator Somdatta at research institute NCBS, Bengaluru, February 2020